After a thorough nominating and election process, we are pleased to announce your 2016 officer nominees:

For the position of Deacon:

For the position of Clerk:

For the position of Financial Secretary:

For the position of Treasurer:

For the position of Sunday School Superintendent:

*Please Note: You will be voting on only one person for the position of deacon.

The Annual Election of Officers will be held on Sunday, December 6th, immediately following the Morning Worship Service. The vote will be held by secret ballot. All elected officers will then take office on January 1, 2016. Please be in prayer concerning the vote and for God’s will to be done! 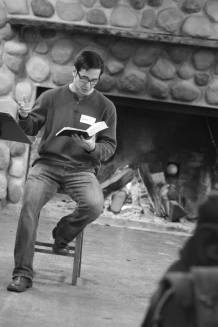 I have been the Lead Pastor of Prairie Flower Baptist Church for over two years now. In that time frame, I have been stretched in some unique ways and have gone through many growing pains. I have also learned some unique lessons along the way, and I would like to share some of those with you:

1) God uses sinful, busted, and broken people for His glory. Yes, I’m describing myself in this statement and not anyone else. In fact, the more and more time I spend in the ministry, the more amazed I am that God would put me into the ministry with all of my sins and shortcomings. I still struggle with doubt, fear, and self-pity issues; but God, for His own divine purposes, is still using me in the ministry. Truly my sufficiency does not come from me, but from God (2 Corinthians 3:4-6).

2) People and circumstances reveal the lingering idols of our heart. I have learned that people and circumstances don’t make us do anything, they simply reveal what’s already resident in our hearts. Check out this list: the pull towards comfort and convenience, the need to be liked, the desire for increasing influence, and the longing for recognition. Yup. All idols of my heart that have been clearly revealed to me this past year; and God has used different people and circumstances to showcase these issues to me. I praise God for this uneasy grace in my life that makes me more like His Son – Jesus Christ (Romans 8:28-29).

4) My wife is still awesome. And I’m not just saying this to round out this list with a nice even number…I mean it. God has blessed me with an incredible wife and ministry partner. I have learned that the pastor’s wife (though not an official role or officer in the church) carries a tremendous amount of burden and stress. I thank God for giving to me a wife who is truly clothed with strength and honor (Proverbs 31:25). My wife continues to bless my life and ministry with encouragement, humor, and fun. Just last night she told me to “loosen up” and “just let it go”…and then we danced together…in the living room…most appropriately…but what an awesome wife I have.

Prairie Flower, it continues to be an honor to be your Pastor. I find it to be a most beautiful challenge and (at the end of the day) an incredible joy. Thank you for allowing me this incredible privilege. God bless you. I do love you guys. See you soon.

Below you will find some tentative items for the 2016 calendar year:

Sunday, January 3, 2016 – Mini-Series on the Mission and Vision of PFBC

Sunday, September 11, 2016 – Special Q & A On the Relationship Between Human Tragedy and the Goodness of God